Mondays for Moms – How to Inspire Your Son With Scripture 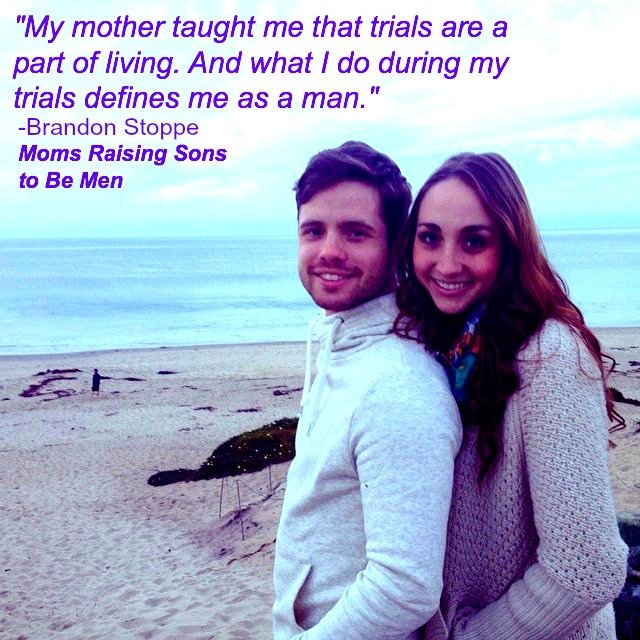 MONDAYS FOR MOMS – HOW TO INSPIRE YOUR SON WITH SCRIPTURE

Take time to share with your son the way God used teenagers in the Bible to accomplish His purposes. This will inspire your son to look forward to however God might work through his young life to influence his generation as well…

First Samuel 17 records the incredible story of David killing the giant, Goliath. David was about 17 years old when he went to the battlefield to deliver supplies to his three older brothers. There, he found his brothers–and the army of Israel–hiding from the Philistine army. When David learned that for 40 days Goliath had been mocking the Israelite army and challenging them to send a warrior to fight him, he immediately declared he would do battle against the giant.

What happened when David stepped forth with great courage?

1. David’s motives were in question. When David said he would fight Goliath, his oldest brother, Eliab, challenged David’s intentions and called him prideful. But Eliab’s misinterpretation of his younger brother’s motives did not sway David’s resolve. David simply said, “Is there not a cause?” (1 Samuel 17:29).

There is something about a “cause” that ignites a fire in the heart of teenagers. And when it is the cause of God, godly teens will go to great length–even to the point of sacrificing their own lives–for the Lord’s purposes.

If your son steps up to do something courageous, be prepared for his peers to question his motives. Help your son learn how to search his own heart and pray that his motivations are God-honoring. And teach him that when he knows God will be pleased with his actions, he does not need to worry about what ungodly people think.

2. David was told he was too young. When King Saul saw how young David was, he immediately discounted David’s ability to fight the giant. After all, Goliath had many years of experience as a warrior. When your son’s abilities are questioned because he is young, remind him that if he is serving the Lord, he should “let no one despise [his] youth” (1 Timothy 4:12).

David did not become discouraged by Saul’s lack of faith in his abilities, because David’s faith rested in God. David recounted to Saul how, as a young shepherd boy, the Lord had given him the ability to kill a lion and a bear with his bare hands so he could protect his father’s sheep.

To help your son not grow disheartened when he faces trials, remind him of how God allowed the lion and bear attacks so David could grow in his faith. As your son recalls how God worked to make David a courageous warrior for the Lord, he will learn to recognize God’s hand in the midst of his own struggles and find the strength to trust the Lord.

Are there lions and bears in your son’s life? Can you learn to trust the Lord’s sovereignty with regard to what He allows your son to endure? Sometimes we moms are so busy rescuing our sons from trials that we get in the way of how God is working to build their faith. In the future, God may ask your son to fight a giant. Will you allow the Lord to prepare your son for the battle?

3. The odds were against David. King Saul tried to suit David with his armor, but it was too big and heavy and encumbered David’s walk. And though Goliath was an experienced warrior with an iron spearhead that weighed 15 pounds, David chose to do battle with nothing more than a slingshot and five small stones.

There will be times when your son will face challenges that seem to be too big for him. The world will throw their ideas of “weapons for success” at your son. But you can teach your son that, just like David’s sling and stones, God can help bring victory through unexpected resources. He will provide your son with the means for facing a challenge in the very moment he needs them.

4. God was with David. King Saul said, “Go, and the Lord be with you” (1 Samuel 17:37). David’s confidence that the Lord was with him became evident to all when he proclaimed to Goliath, “I come to you in the name of the Lord of hosts, the God of the armies of Israel, whom you have defied” (1 Samuel 17:45).

To equip your son to be courageous when he thinks he stands alone, encourage him to memorize 1 John 4:4: “He who is in you is greater than he who is in the world.” When you remind your son that the Spirit of the living God dwells in his heart to give him strength and courage, you prepare him to accomplish whatever it is the Lord asks him to do.

5. David had faith. When David was face-to-face with the giant on the battle field, he did not waver in his resolve. Rather, He said to Goliath, “This day the Lord will deliver you into my hand, and I will strike you and take your head from you” (1 Samuel 17:46).

David did not look at his unnerving circumstances and cower under pressure. Rather, he looked right at his enemy and, in belief, proclaimed conquest. In the same way, there will be times when your son will have to courageously step out to do God’s work. One of the best ways to teach your son how to live by faith is to demonstrate confidence in God yourself. Let your son observe how true faith is lived out in real life.

6. David had a proper perspective. David’s goal was not to make a name for himself, but to glorify God. His righteous courage came from a deep longing to defend the name of the God of Israel. First Samuel 17:46-47 clearly defines David’s purpose in fighting the giant: “That all the earth may know that there is a God in Israel.”

From David’s example, you can teach your son what it means to glorify God. David’s desire was not to draw attention to himself, but to uphold God’s glory. Because David clearly understood the purpose of his mission, he knew who would help him emerge victoriously. So that all who were watching that day, and all of the people who would hear the account of this notorious battle, would honor the Lord.

David was a shepherd boy who was also a musician, and poet. He was a skilled archer and warrior as well. By teaching your son about the life of David, you can help him discover that David was involved in many activities, and he did each of them to the best of his ability. Because David’s accomplishments were never about his own fame, but rather to exalt the Name of God, God gave David great success.

HEROES OF THE FAITH

In the Bible, there are other teenagers through whom God accomplished great feats. You can tell your son about Joseph, Samuel, Daniel, Shadrach, Meshach, and Abed-nego. Helping your son discover how each young man devoted his life to serving the Lord can plant a seed in his heart to commit his future to God as well. And when you teach your son how those same men are now reaping eternal rewards from their service to God, you will inspire him to live with an eternal perspective.

You can also introduce your son to the “heroes of the faith” listed in Hebrews chapter 11. Immediately after reading about these heroes we are told, “Since we are surrounded by so great a cloud of witnesses, let us lay aside every weight and sin which so easily ensnares us, and let us run with endurance the race that is set before us, looking unto Jesus, the author and finisher of our faith” (Hebrews 12:1-2).

Teaching your son about Bible heroes will inspire him to live like them. Will you run the race with heroic faith? Your example will earn you the privilege of asking your son to grasp the baton you are handing him. So that he can continue this great relay race of Christian heroes through the ages.
(Rhonda Stoppe Excerpt Moms Raising Sons to Be Men)