Are You Trusting God in the Middle of Despair? Here’s Hope: 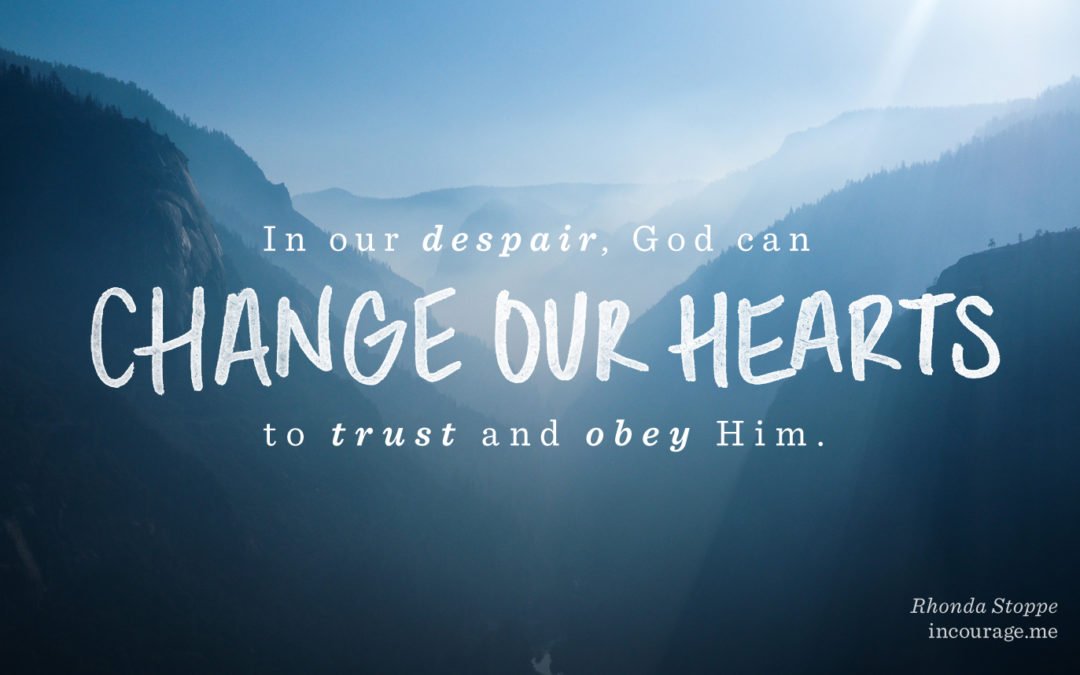 Trusting God in the middle of despair isn’t always easy… Here’s my story: “Father, how can You not heal my son?” I cried out. I fell at the foot of our bed after my son, Brandon, had another severe seizure. After making sure he was safe, I fled to my room to weep before the Lord.

Four years prior, my husband and I had planted a church where God was bringing teens to Christ. One night, Brandon had a seizure that lasted twenty-eight minutes, leaving him unconscious. When he finally awoke, my bright-eyed, articulate little boy could only speak baby talk. It was in this state that the paramedics flew Brandon to the nearest hospital.

On my drive to the hospital, I begged God not to let Brandon have brain damage as a result of such a long seizure. When I got to his room, I was relieved to find Brandon jumping on his bed shouting, “Momma, I rode on a helicopter!”

While they gave Brandon an EEG to study his brain activity, I walked over and kissed my sleeping six-year-old on the temple. The technician called me over, circled the read out and wrote, Mom’s kiss. She explained, “He knows you just kissed him.” (Crazy, right? Since that experience, I tell moms, “Kiss your kids while they’re asleep. They know you’re kissing them.”)

After four days in the hospital for tests and observation, we were told Brandon had “severe seizure activity in his brain.” How is this possible? He is completely normal, I thought. I was convinced there would be no more seizures for him, but sadly, another seizure did come . . . and another and another. For months, Brandon slept on a pallet on the floor next to our bed where I would lay on my stomach reaching down to hold his little hand just in case he might have a seizure in his sleep.

After a while, life took on a new kind of normal, visiting neurologists and administering strong medications to suppress the seizures. Because of the medication’s sedating effect, focusing at school became a struggle for him, and my heart ached when the principal explained Brandon would be assigned to special education classes at school.

Through it all, we were able to trust the Lord and believe His hand was upon our boy until that night four years later when I found myself in a puddle of tears after another severe seizure. I finally hit a breaking point. I prayed in desperation, “Lord, we are serving You. Kids are coming to Christ. Why won’t You heal my son? I’m done . . . I quit!”

In that moment of despair, God met me. I was ready to walk away, but my heart heard, “In everything give thanks; for this is the will of God in Christ Jesus concerning you” (1 Thessalonians 5:18 NKJV). God was beckoning me to Himself. I tearfully asked Him to help me somehow be thankful for this trial. And do you know what God did? He changed my heart.

Ever so slowly, we watched our son, who had been too sedated to play sports, grow into an accomplished musician. Even though we’d hoped to hear the glory of the crowds in our son’s accomplishments as an athlete, God’s plan was to raise up our son to lead crowds to glory in His Son’s accomplishment through worship.

In over thirty-six years of ministry, I’ve watched moms walk away from God in the midst of their despair only to.. Read the rest of the article as it appeared first at (in)courage.me

Rhonda Stoppe is the NO REGRETS WOMAN. With more than 30 years experience of helping women build a no regrets lives.

I could have listened to Rhonda talk all night is what women say about Rhonda’s enthusiastic, humorous, transparent teaching, and zeal as an evangelist.

She’s committed to fulfill the Titus 2:4 commission by mentoring, teaching and writing books that are inspiring, grounded in Scripture and easy to read––like you’re visiting with a friend over coffee.

Rhonda is the author of 6 books and appears on numerous radio programs including FamilyTalk, Focus on the Family, Family Life Today and hosts The No Regrets Hour. She speaks at women’s events, Pastor’s Wives Conferences, MOPs and homeschool conventions. Sharing the gospel is her sweet spot––she’s an evangelist at heart.