WHEN THE ENEMY ATTACKS YOUR MARRIAGE

WHEN THE ENEMY ATTACKS YOUR MARRIAGE By Rhonda Stoppe

Warning signs alert us when the Enemy is about to attack our marriage. What couples do with those signs determines how victorious they will be in fighting off the Devil’s treacherous schemes together.

One evening my husband, Steve, stepped outside to quiet our dogs that were barking uncontrollably. From inside the house, I heard Steve’s voice grow louder and more urgent.

“Rhonda, come quick,” he shouted from the porch. “There’s a snake in the house!” 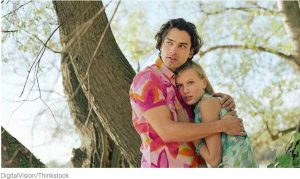 At this point I was sure Steve had completely lost his mind because he thought I was brave enough to be left alone with a snake. But I reluctantly moved into the living room anyway. I was greeted by a disturbing sound I recognized immediately. I looked toward the source of the noise. This wasn’t just any old snake; a 4-foot-long rattlesnake was coiled in the corner of our entryway!

I jumped onto the sofa as I heard Steve call out, “Keep an eye on him. I don’t want him to get lost in the house!”

His request made sense because I was certain I would have had to sell the house and move away if that thing disappeared inside. So I did what any dutiful wife would do; I kept my eye on the “visitor” and decided to video this terrifying event with my phone. At least people will know what happened to me if I die.

When Steve returned, he skillfully sneaked up on the snake and pinned its head to the tile floor. All the while the snake’s body writhed, its rattled tail shaking ferociously — sending out a terrifying sound.

Knife in one hand, shovel in the other, Steve moved in for the kill. I spoke quiet, encouraging words to him as he cut off the snake’s head. Afterward the snake’s huge body continued to writhe, spreading its brown-red blood all over my tiles.

Certain the snake was no longer a threat, I turned off the phone’s video recorder and hurried to hug my husband and thank him for his heroism.

What an ordeal! In an instant our relaxing evening had turned stressful and terrifying. Steve explained to me how he had stepped right over the venomous creature on the doorstep as he walked onto the porch. At that moment we both realized how close he had come to getting bit. Thankfully God had protected my husband even before Steve realized he was in danger.

Realize that Satan is a snake.

The snake in our house was certainly an unexpected intrusion. The incident reminded me of how many times Satan sneaks into our homes. As with our dogs barking uncontrollably and the loud rattle of the snake, warning signs alert us when the Enemy threatens our lives. What we do with those signs determines how victorious we will be in fighting the Devil’s schemes.

The Bible says Satan comes to kill, steal and destroy. The apostle Paul urged the church at Corinth not to be ignorant of Satan’s schemes (2 Corinthians 2:11) because when we are aware of the tactics of the Enemy, we will be better equipped to stand against his devices.

Let’s look at steps you can take the next time that Serpent of old attempts to attack your marriage:

When the snake slithered into our house, what if my immediate response had been to shout at my husband for leaving the door open? What if I had blamed Steve for the intrusion and refused to stand watch over the snake while he ran for the shovel? That would have been foolish.

Throughout three decades of ministry, my husband and I have watched marriages fall apart when couples erroneously believed their spouse was their foe. Recognizing the real enemy is Satan, not your spouse, is a vital step to take when your marriage is attacked. This principle can be seen in Ephesians 6:12, which says, “For we do not wrestle against flesh and blood, but against principalities, against powers, against the rulers of the darkness of this age, against spiritual hosts of wickedness in the heavenly places” (NKJV).

All too often, couples turn on each other when they dwell on how their spouse has not measured up to expectations and negative thinking sneaks in to undermine their marriage. Instead couples need to stand together against their real enemy, Satan.

First Peter 5:8 warns, “Be sober, be vigilant; because your adversary the devil walks about like a roaring lion, seeking whom he may devour” (NKJV). At any moment Satan could slither through your front door. Be watchful for the first sign of the Enemy and be ready to act fast. Just as Steve immediately called out to me to watch over the snake in our house, at the first sign of trouble you, too, should respond with the same urgency and intensity.

In the same way, if you don’t move swiftly at the first feelings of resentment or unforgiveness toward your spouse, you may find contention hiding in your home. Hebrews 12:15 warns how roots of bitterness cause trouble and defile many relationships — beginning with your marriage and spilling over into your connections with your children.

As Steve heroically beheaded the awful creature, I kept video recording the event with my phone. (Seriously, what was I thinking?) Later, I shared the video with anyone who would watch it. I was so proud of how calmly Steve responded that I wanted everyone to know.

Consider how many times God has protected you and your family from unseen attacks of the Enemy. It is important to recount to yourself, to others and to your children God’s faithfulness. Deuteronomy 4:9 instructed the Israelites, “Only take heed to yourself, and diligently keep yourself, lest you forget the things your eyes have seen, and lest they depart from your heart all the days of your life. And teach them to your children and grandchildren” (NKJV).

Rather than taking God’s blessings for granted, gratefully recall the victories He has given you, which includesalvation and hope for a happy marriage. Then tell others of this hope, beginning with your kids.

Rhonda Stoppe has more than 30 years of experience as a marriage mentor, pastor’s wife, author and speaker. She is the author of If My Husband Would Change, I’d Be Happy (& other myths wives believe).

How strong is your marriage? Find out today with the Focus on Marriage Assessment. This reliable assessment is based on the research and experience of Focus on the Family’s marriage experts Dr. Greg and Erin Smalley. Take this free assessment now.

Rhonda Stoppe is dedicated to help women LIVE LIFE WITH NO REGRETS. Rhonda is the author of 6 books including: Moms Raising Sons to Be Men , and Real Life Romance Her newest book is The Marriage Mentor, is co-authored with her Pastor-husband, Steve Stoppe. (Harvest House Publishers) With over 30 years experience of helping women build a life with no regrets as a pastor’s wife, mentor, speaker, author, mom & grandmother. She’s a regular guest on Focus on the Family co-host of The No Regrets Hour, and other popular Christian Radio broadcasts. Rhonda helps women to: Break free from regrets that hold them back Grow in wholehearted devotion to Christ Find victory over people-pleasing Have the marriage others only dream about Build a godly legacy to become more influential than they ever dreamed possible Rhonda is passionate to share the gospel and teach women the sound doctrine of scripture. Rhonda and Steve have been married 38 years and live out their own real life romance on their ranch in Northern California. To invite Rhonda to Speak at your women’s event, or to book the Stoppe’s No Regrets Marriage Conference please visit: www.NoRegretsWoman View: Promo Video & marriage videos